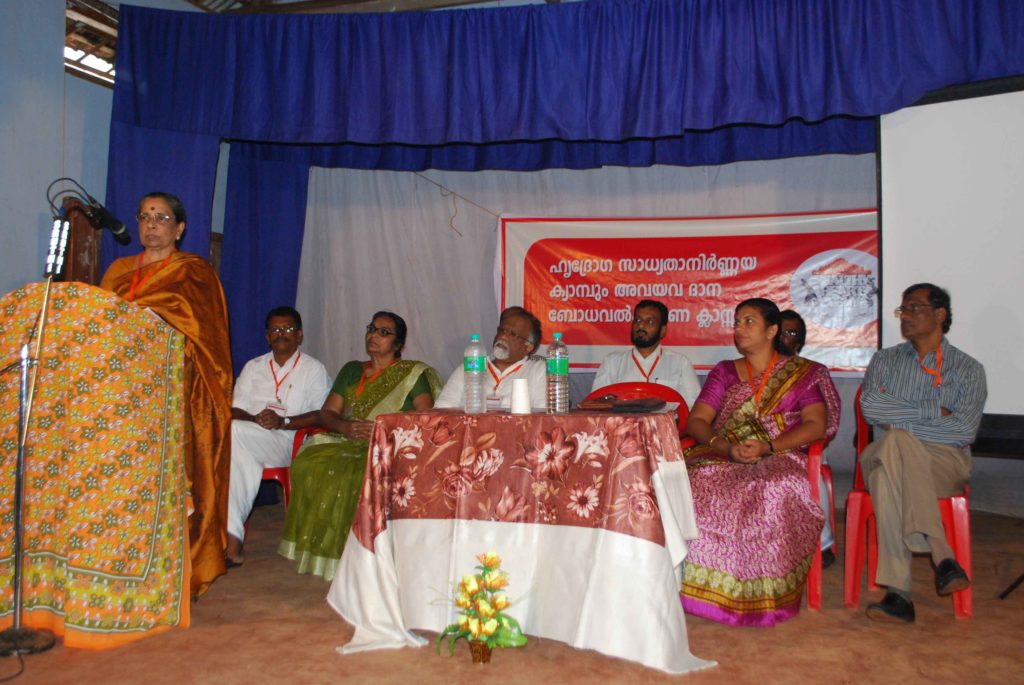 The inaugural medical camp was for women over 45 years, who had the symptoms for cardiac problems, was jointly organized by the Healthy Heart Forum, Blood Donors Forum and Councillors of Calicut Corporation Wards 23, 29, 30, 31 Palayi at the Kachillat School premises on 20/10/2013.

The camp commenced at 9:00 AM with the following counters:

After the various tests the people were taken to the Consultation Room where doctors V Gopakumar, Ismail E T, AV Kannan, Nitin G and Athmaja reviewed their results and gave proper advice. Dr Murali Vettath dealt with women who had the possibility of cardiac risks. They were told to take an ECG and review once again. Those who required further evaluation were told to meet the concerned Doctors.

The Mayor of Calicut Corporation Prof A K Premajam arrived at 10:30 AM to inaugurate the camp. She was received by the Coucillors – Mrs Devaki K, Mrs Kavitha Arun and Mr Koya Moideen,  Mr Hemapalan of the Healthy Heart Forum and Mr Ashok Alaprath of the Blood Donors Forum. The Mayor was happy that such a camp was being held for women and she hoped that more such camps will be conducted in the future.  Dr Murali Vettath then gave a talk on the urgency for women to be aware of the symptoms of cardiac risks and the need to take precautions before it was too late. There was a power point presentation on the subject. He also spoke on the fact that people should be made aware of the necessity to donate organs. Even now people were not ready to pledge their organs for the needy. Mr Hemapalan and Mr Ashok Alaprath also spoke.

After this programme the registration for KNOS (Kerala Network of Organ Sharing) and Healthy Heart Forum began.

The camp concluded at 5:30PM in the evening with a valedictory function where the District Panchayat President Mrs Kannathil Jameela was the Chief Guest. She thanked Dr Murali Vettath for helping the Councillors to hold such a unique camp. She urged the women to take heed of the risk factors pointed out by Dr Murali and she also supported the need to make people aware of the importance of organ donation. She then distributed KNOS ID cards to over 50 people who had registered at the camp.

Mr Jayaprakash the Camp Co-ordinator then gave the vote of thanks.