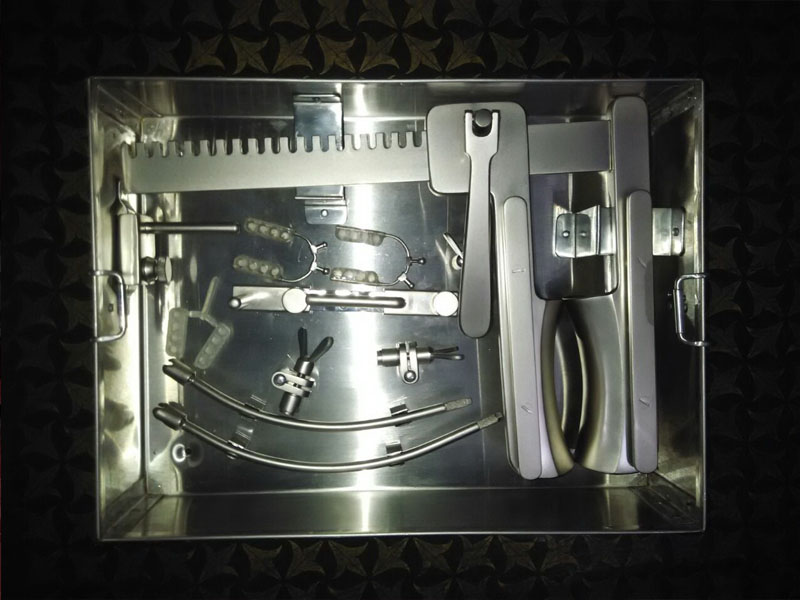 Once the beating heart surgery started getting popular, we started
propagating the technique. We then noticed that the stabilizers
are the only ones that needs to be discarded. But that too could be
sterilized and reused, using ethylene oxide. In spite of the sterilization
technique, we still had to discard these plastic stabilizers after using
it for about 20 times, as it became sloppy. Hence we noticed that
in our unit we had to procure two stabilizers every month. And so
24 stabilizers a year had to be discarded. This was again costing a
thousand USD a piece. Hence we ventured on to develop a reusable,
metallic stabilizer where in the only piece that needed to be replaced
for every surgery were the pods (Figure 1).These pods would cost only
about 10 USD a piece.
Once this stabilizer was developed, we have now started using
them as normal metallic surgical instruments and have been routinely
sterilizing them. Over the last two years we have used the same
instrument sets for over six hundred coronary surgeries. This set is
in fact made of a sternal spreader with a railing on both sides over
which a vertical two inch metallic rod could be fixed with a screw and
the position could be moved according to the coronary artery which
needed to be bypassed. Over this metal rod, we have the stabilizer rod
that is fixed at its base with another clamp, which in turn could be
moved over the metal rod to which ever position we need.
The stabilizer rod is in fact a curved metallic tube which houses
another curved metal rod inside. The curved out tube has a distal
metal end that holds a housing in which the pod head could play around.

This housing has three slots which allows the pod to move
in them when positioned. The proximal end of the outer tube has a
screw which when screwed would tighten the inner rod. The inner rod
at its distal end is convex and this moves on the concave end of the
interlocking rod in front of it. The interlocking rod is the crux of the
stabilizer. This is a half a centimetre piece of metal which is concave
on both ends. The proximal concave end allows the metal rod to push
it forward or distally, and the distal concave bit allows the head of
head of the pod to rest on it. Hence when the pod is placed parallel to
the coronary artery, we first tighten the rod in the intended position
and the pod is tightened by tightening the screw at the proximal end
this screw in turn pushed the inner rod forward and the rod pushes
the interlocking rod which in turn tighten the head of the pod in the
desired position. This once positioned is so stable that it does not
move at all. The pod has suckers like in the conventional stabilizers,
which could be attached to the suction apparatus and used as suction
stabilizer as well. Over time, once we get used to the stabilizer we can
avoid suction if not absolutely needed